SAFE SEAS is very happy to welcome Mowlid Aden to the team. Mowlid will contribute to mapping the maritime security sector in Djibouti. This case study will also identify best practices, gaps and shortcomings in the delivery of maritime security capacity building. 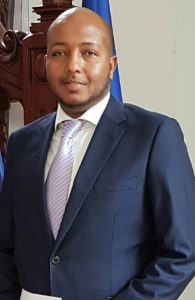 Mowlid joined Djibouti Ports & Free Zone Authority (sole delegated Authority in charge of developing and managing maritime infrastructures in the Republic of Djibouti) as a Director of Security Compliance and Managing Director of the RSO. He has worked with International Port Operators for many years in different locations around the world, has held various management positions and helped the group growth in Africa.

Mowlid holds a BSc in Information Systems and Management from the University of London with Executive Education at The Institute for Policy and Strategy (IPS), Herzylia-Israel and ENA in Paris. Mowlid has been actively involved in various high-level associations and Djibouti Government bodies including time as an adviser to the Ministry of Transport of the Republic of Djibouti for Maritime Security. He has been a delegate to a number of international maritime conferences, including the United Nations Conference on the Law of the Sea, the Djibouti Code of Conduct and at the International Maritime Organization in London.