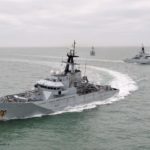 Scott Edwards and Tim Edmunds recently wrote a short article for The Conversation, drawing upon insights from the SafeSeas Policy Brief ‘Delivering Maritime Security after Brexit: time for a joined-up approach‘.

Four dinghies carrying 53 migrants who tried to cross the English Channel from France were intercepted by British and French authorities in early April. The crossings are a reminder of the importance of maritime security and safety to the UK.

Brexit has led to many uncertainties, including over the governance of the UK’s seas in the future. Withdrawal from EU regulations at the end of the Brexit transition period on December 31 2020 raises questions over how to face the difficult task of managing maritime risks which are currently managed alongside the EU.

Uncertainty has also spurred new government efforts by shining a light on the need to secure UK waters, something we’ve written about in a new report.

The UK faces rapidly evolving risks to its shipping lanes, fishing grounds and marine infrastructure. These risks include illegal fishing, human trafficking, organised crime such as smuggling, terrorism, and the potential for protests at sea.

Terrorist attacks could cause significant loss of life if targeted against ferries and cruise liners. Illegal fishing could affect the livelihoods of fishers and marine biodiversity, while other risks could have an impact on the wider economy in a context where 95% of Britain’s trade flows via the ocean.

These risks tend to interlink with each other in ways that are increasingly well documented in other regions of the world. In Somalia, for example, local fishers losing their stock as a result of illegal fishing have turned to piracy. What unintended consequences of new risks might appear in UK waters is still not fully understood.

Maritime security threats can also take place simultaneously. Without greater understanding of these risks, it’s difficult to know which should be prioritised.

These issues have been complicated by the UK’s withdrawal from the EU. During the current transition period the UK manages its waters within a wider EU maritime governance framework and under EU regulations, as it did while it was an EU member. While the UK isn’t expected to cease all cooperation with the EU when this comes to an end, it will be required to depend more on national enforcement and regulations.

This shift is most visible in the fisheries sector. As part of the EU, British fisheries were managed under the Common Fisheries Policy meaning both UK and EU fishing boats had access to quotas in UK waters. Such arrangements are likely to come to an end with the UK choosing to regulate its own waters.

UK ports are also a hotspot for change as they seem likely to withdraw from EU port legislation. This could lead to new national regulatory challenges such as a need to balance harmonisation with the EU with the pursual of British priorities like the creation of freeports, aimed to give British trade a competitive edge.

Taking sole responsibility is made difficult by other complicating factors. In the UK, different risks are managed by different government agencies, with problems of jurisdictional overlap.

Depending where it takes place, multiple agencies could be involved in illegal fishing, for example. This could include the Marine Management Organisation, Marine Scotland, and the Royal Navy’s Fishery Protection Squadron. Other agencies may contribute boats or intelligence, such as the National Maritime Information Centre, Border Force and the National Crime Agency.

Yet, a common understanding of the threats and consistent communication between departments is lacking in some areas. This is more of a problem for devolved issues such as fisheries, which add even more authorities, departments and agencies to the picture. The relationships between these different organisations are likely to be further tested by the challenges posed by Brexit.

But Brexit also offers the UK an opportunity to improve its maritime security. The leak of Operation Yellowhammer in 2019 raised the public profile of maritime issues such as delayed freight in ports, the illegal entry of EU fishing boats into UK waters and potential clashes between fishing vessels. This came at a time where there were high profile landings of illegal migrants along the south coast of the UK, while Operation Yellowhammer warned of stretched maritime enforcement capabilities.

The UK has started off well. In 2019, the UK government created the Joint Maritime Security Centre (JMSC) to coordinate all the different agencies involved and foster interaction between them. The JMSC conducted a joint UK maritime security exercise at the end of 2019, highlighting how coordination can improve enforcement. It is also preparing a new UK maritime security strategy.

Interactions between the different government agencies involved in managing the risks to the UK seas need to become more frequent and overcome existing divides to create habits of cooperation and communication. Other groups such as fishing communities need to be included in deliberations. Transparency and information sharing in the process of drafting a new maritime security strategy can help to identify common goals, encourage involvement, and establish a shared basis for action.

A review of resources would also be worthwhile to identify the means the UK has to secure its waters, what gaps exist, and how these means can best be shared.

Quah Ley Hoon, from @MPA_Singapore points out the importance of raising visibility to open the path to opportunities for women and raise the visibility of women in the industry. Watch Live here: https://bit.ly/3llG1vP #WomenInMaritimeDay