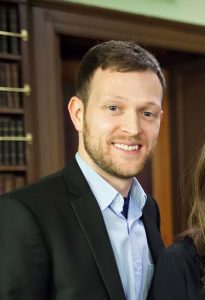 SAFE SEAS is happy to welcome Dr. Robert McCabe to the team as a Postdoctoral Research Associate. Robert completed his PhD in 2015 at Maynooth University in Ireland examining the evolution of contemporary counter-piracy initiatives and broader maritime security governance in Northeast Africa and Southeast Asia funded by a John & Pat Hume Research Scholarship. Robert’s wider research interests include maritime security, power and governance, strategic studies, naval history and theory, defence studies, international maritime law and international relations. He has previously worked as a researcher with the Edward M. Kennedy Institute for Conflict Intervention at Maynooth University and as an Occasional Lecturer at the Irish Defence Forces Command and Staff School. Robert has a book – Modern Maritime Piracy: Genesis, Evolution and Responses – forthcoming with Routledge in October 2017.

@QMEECS How should we understand and respond to crime at sea? We're hearing from @EdmundsProf about his work on the manifestations of and responses to #bluecrime with @safeseas1 as part of our Global Uncertainties book launch. Prof Edmunds has been working on a new blue crime wiki.