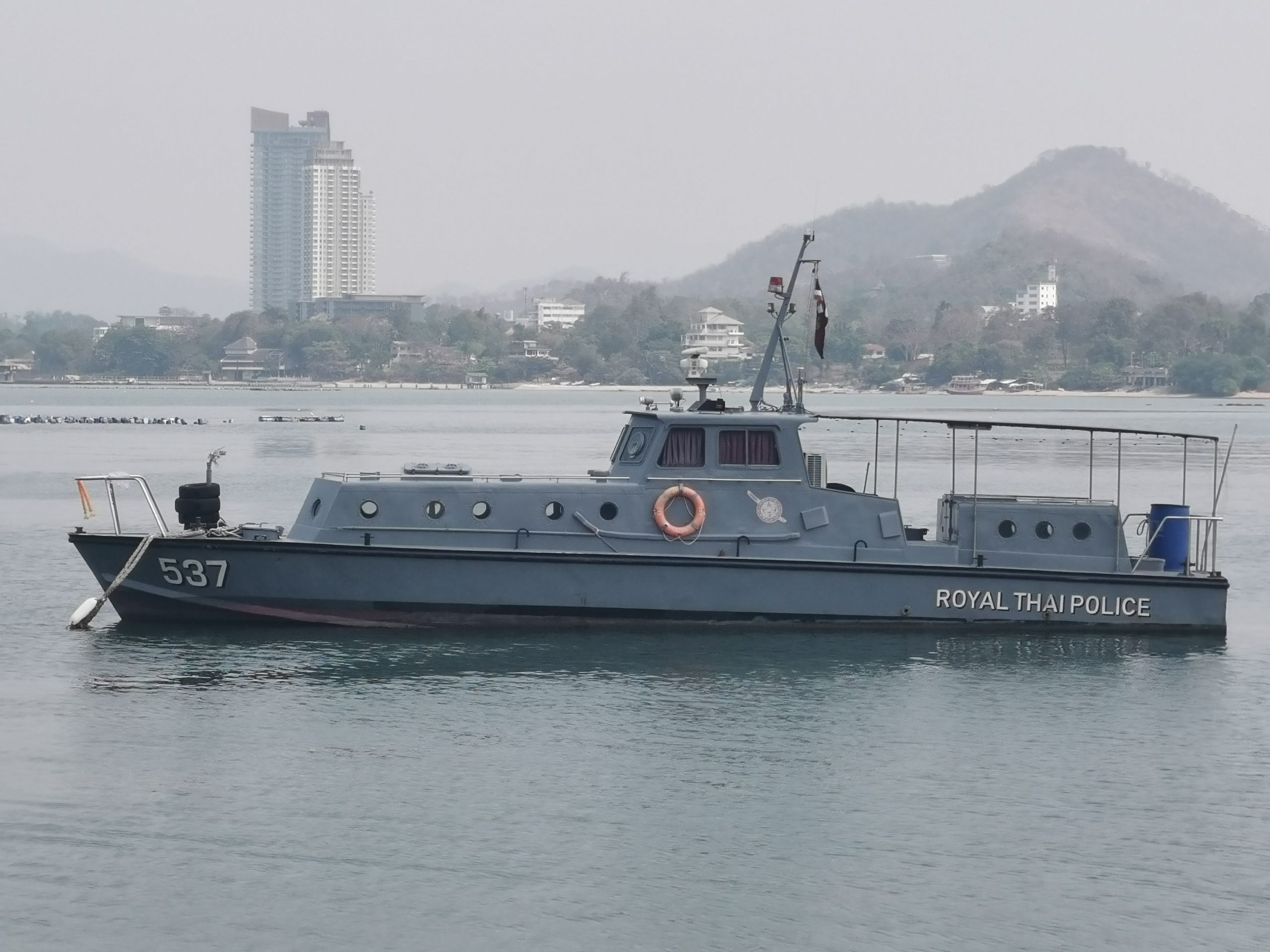 When it was first established in 1997, ThaiMECC was intended to be a focal point for tackling Thailand’s maritime insecurities – particularly trafficking and illegal fishing. Bringing together the Royal Thai Navy, Fisheries Department, Marine Department, Customs Department, Maritime and Coastal Environment Department, and the Marine Police, the agency sought to make inter-agency coordination more effective through seminars, exercises and information-sharing.

The backbone of ThaiMECC (in both its previous and current incarnation) is the Maritime Information Sharing Centre (MISC). MISC not only gathers and collates information from the different agencies’ information platforms, but also has a staff tasked with analysis, evaluation and dissemination in order to increase Maritime Domain Awareness.

ThaiMECC acts as a focal point not only for internal coordination, but also increasingly external cooperation. Prior to the establishment of ThaiMECC there was no ‘Single Maritime Point of Contact’, something which regional agencies have been advocating for. Now, however, it is able to act as a representative for Thailand’s maritime security interests and is working increasingly closer with regional agencies such as Indonesia’s Maritime Security Agency (BAKAMLA), Malaysia’s Maritime Enforcement Agency (MMEA), and Vietnam’s Coast Guard.

The ability to reach these goals have been strengthened by ThaiMECC’s recent structural change. Previously, coordination was seen to be limited by continuing competition between the different agencies within ThaiMECC. While those at the centre considered themselves committed to the core tasks of the organisation (rather than merely their own agencies’ agendas), some complaints were made that commitment was not always sincere from those further away from the centralised structure.

Coordination efforts themselves could be hampered by squabbles over jurisdiction and authority. Difficulties in trust-building between the different agencies were present in ThaiMECC’s original form as those who successfully won such struggles were able to capture a greater share of the finite resources dedicated to tackling maritime insecurity.

By centralising command and putting in place a clear structure, these issues have been somewhat overcome. Competition had arisen in the past as a result of ambiguity and overlapping jurisdiction. Such ambiguity no longer exists, however, due to the now clear structural hierarchy that places ThaiMECC above the other agencies. This has resulted in less space to argue or disagree openly over who has jurisdiction, as authority has been clearly delineated.

This more command-centered approach has undoubtedly had benefits. For example, a recent case of counter-IUU fishing against the vessel ‘Uthaiwan’ off the coast of Phuket showcased how having clear roles and authority allow for greater efficiency. Accused of IUU fishing of Tuna in the Indian Ocean, eight Thai nationals were charged with bringing a non-Thai fishing vessel that has undertaken IUU fishing into Thai territorial waters. The successful enforcement action is indicative of the efficient process in place. Information from the Fisheries Monitoring Center concerning suspicious ships not utilising their AIS was directly sent to MISC. Through MISC, this information was acted upon by ThaiMECC, who ordered Naval assets in the vicinity to intercept the suspected IUU ships and escort them back to a Thai port, where the Customs Department were told to search for and seize any illegal fish. While it is currently unclear as to whether seizures were made in this case, the follow-up investigation is also being handled by a multi-agency team.

This example shows that the ThaiMECC are better able to utilise maritime assets without concern that cooperation may be limited by unwillingness as a result of competition. Other successes are areas such as the management of migrant workers in the fishing industry. Allegations of slavery in this sector has lead to a greater focus from ThaiMECC. More efficient information and knowledge sharing, including a joint-database and multi-disciplinary task forces are key to Thailand’s efforts to counter this issue and there has been an increase in arrests following greater coordination.

Another positive factor is that by institutionalising a command centre that has a distinct role and identity, there is now a greater focus on ensuring it has the required assets and authority to do the work in which it is tasked with. ThaiMECC Officers, for example, will not have to depend on different agencies for different parts of the enforcement process (e.g. some having authority to search ships, some having authority to enact arrests etc.). Instead, they will be empowered themselves to investigate, search, arrest and indict. This is something which was seen as problematic prior to the restructuring, as it acted more as an umbrella agency for coordinating those within it. Now gaining its own tangible assets as it has a greater role to play in of itself.

What lessons does the ThaiMECC this offer for other agencies in the region that depend more on a coordination structure such as BAKAMLA, the Philippine’s National Coast Watch Center & MMEA?

First, the movement from coordination to command was not a quick one. It is only after 21 years that ThaiMECC has been able to develop the resources that it needs to be in the position to command. It was also not a direct evolution: a Command Center Combating Illegal Fishing (CCCIF) was set up prior to ThaiMECC’s restructuring as a command mechanism for the agencies. This command could only be transferred to ThaiMECC following a long and tumultuous restructuring in order to ensure it was up to the task. As such, there has been some skepticism from other regional agencies that they would be able to follow this process even if they wanted to as it requires time, focus, and assets.

Second, there are concerns from the civilian agencies within the organisation that it is becoming too militarized. The Navy has always been the dominant agency within the organisation, and this has been further embedded following the restructuring. While the Prime Minister (himself a former Commander in Chief of the Royal Thai Army) chairs ThaiMECC, it is the Deputy Director tasked with commanding the agency. The Deputy Director is the Royal Thai Navy’s Commander in Chief, while the Navy’s Chief of Staff forms the secretariat. The three ThaiMECC areas are directed by the commander of the naval area command. Many of the operating staff are from the military, and uniformed personnel are ubiquitous at the centre itself. While an HQ is under construction, it is currently located at the Navy Dockyard Department, further reducing its ability to forge a distinct identity.

While this perhaps makes the organisation more streamlined and coherent, other agency staff are less happy about the dominance of the Navy and the declining civilian role. There is a perception that the Navy is taking over, resulting in other agencies gradually losing their assets or having their budget reduced. It is also occurring in a context of wider concerns of the increasing political dominance of the Armed forces in Thailand making accountability and holistic approaches to issues increasingly difficult. As a result, competition has not completely disappeared, and some distrust is still present. The practices of competition have changed to become muted, in order to fit a context wherein the Navy can no longer be disagreed with as openly as before due to both its increasing power and the legitimisation resulting from its mandate of authority. Instead of the direct disagreement enabled by the space of ambiguity over who has jurisdiction, there are now pointed remarks and informal grumblings. For its part, the Navy is settling into its command function. Trust-building to enable coordination is no longer emphasised as much as control, and it is unclear as to whether this will impact negatively on cooperation in future if other agencies do not feel they are being engaged with meaningfully as equal partners holding shared interests.

ThaiMECC’s renaming and restructuring – from coordination to command – is having a strong impact on increasing efficiency by providing clarity on the structure, roles, and jurisdictions of the involved agencies, as well as the better mobilization of assets and strengthening of Maritime Domain Awareness due to a unified command hierarchy. These will undoubtedly contribute to Thailand’s maritime enforcement, though questions of sustainability remain due to continuing issues of inter-agency relations.