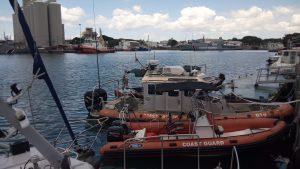 SafeSeas has received new funding from the Economic and Social Research Council (ESRC) of the United Kingdom. The ESRC is the premier grant making authority of the UK in the field of social sciences. As was announced in a press declarration, SafeSeas will receive funding from the ESRC Partnership for Conflict, Crime and Security Research (PaCCS). The funding is for the new SafeSeas project titled “Transnational organised crime at sea: New evidence for better responses” (TOCAS). The project is led by SafeSeas Director Tim Edmunds, who is Professor at the University of Bristol with Professor Christian Bueger from the University of Copenhagen acting as the co-investigator.

The TOCAS project examines maritime crime in the Indo-Pacific region. Case studies of the Western Indian Ocean, South East Asia and South Pacific sub-regions explore types of crime at sea, their interconnections and responses. TOCAS brings together for the first time ever existing research on maritime crime from different disciplinary backgrounds. The first objective is to to develop an evidence base for policy making. TOCAS compares across sub-regions how international actors are working together. The second objective is to develop guidelines and promising practices for how to tackle maritime crime.

Read the full press declaration of the ESRC here. For further information on the TOCAS project contact Professor Edmunds.

Very much looking forward to attend this event by @SeaPowerCentre bringing all major voices on #maritmesecurity in the #indopacific together. In my address I will revisit the key trends in thinking #security at sea and #bluecrime. @safeseas1 https://twitter.com/SeaPowerCentre/status/1521278365810008064

SPEAKER SPOTLIGHT📢: Dr Christian Bueger, Professor of International Relations from the University of Copenhagen, will deliver the keynote address on a commonality of purpose in maritime security at this year's Sea Power Conference. @c_bueger. #IndoPacific2022