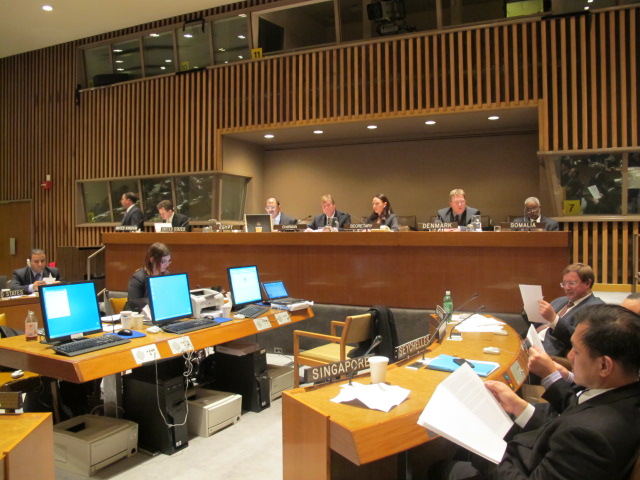 In July 2017 the Contact Group on Piracy off the Coast of Somalia (CGPCS), the main global governance body steering the international campaign to address Somali piracy, will hold its 20th plenary meeting in Mauritius. What issues will the CGPCS have to face and what should we expect from the meeting? In this comment, I discuss some of the core questions that the international community under the leadership of the current chair of the group, the Government of Seychelles, will need to tackle. The CGPCS will have to examine the current situation, further the transition agenda, and consider a number of housekeeping issues.

A return of piracy?

The first and most obvious question is how the international community makes sense of the recent incidents of armed robbery in Somali waters. Incidents, such as the hijacking of the ARIS 13 in March 2017, but also the series of smaller incidents involving fishing vessels, in particular from Iran, raise the question of whether we are currently facing a resurgence of Somali piracy. The military analysts of the international naval missions, as well as academics, have long warned that pirates have the capacity and intent to go back to their business once the international community lowers its shields. Is that the situation we are facing at the moment? If so, what are the implications for the transition agenda and how naval operations continue in the area? To discuss this issue the CGPCS will have to consider the evaluation of the military analysts in the SHADE briefing, but also hear the voices of the countries affected by the recent incidents, including Sri Lanka and Iran. A strong message to the shipping industry to continue to comply with the Best Management Practices will most certainly be required.

The situation in Somalia

With the autumn 2016 parliamentary election and the subsequent election of former Prime Minister Mohamed Abdullahi Mohamed to the post of President of Somalia the country has a new government. The electoral process has halted many important policy initiatives, including the Somali National Maritime Security Plan. Capacity building in Somalia and the ongoing commitment of the government to deter future piracy activity are important cornerstones of the international campaign. The CGPCS will have to seek reassurances that the work with the Somali government is on track, that the grievances of the coastal communities feeding piracy activity are considered as a national priority, and that measures are put in place to ensure that the pirate networks do not go back to business.

In January this year, the chair announced that the core theme of the 2017 CGPCS work is “Leaving a Lasting Legacy for the Region”. This follows the 2016 emphasis on regionalizing the counter-piracy structures. Regionalizing counter-piracy is in everyone’s interest. Yet, capacity building has not developed as far as some would have expected. Neither are regional countries in the position to provide the law enforcement and surveillance assets necessary to deter piracy, nor is the regionally owned maritime domain awareness structure ready. Addressing piracy and providing maritime security is not necessarily a top political priority for many countries of the region given they face a broad range of development challenges. What the region can actually take over when from the international community remains an open question.

How the puzzle pieces of regional capacity building support fit together requires further clarification. This concerns, in particular, the ‘big three’ regional capacity building projects: the Djibouti Code of Conduct (DCoC), the EU’s Regional Maritime Security Programme (MASE) and the UNODC’s Indian Ocean Regional Maritime Crime Forum. The three projects aim at developing regional structures for maritime security with varying memberships and without fully coordinating the activities among each other. Other regional maritime security initiatives, such as the Indian Ocean Naval Symposium‘s work on maritime domain awareness or the maritime security work of the Indian Ocean Rim Association also require consideration. Facilitating dialogue and ensuring the exchange of information between these projects and organisational structures will be important for the plenary agenda if regionalization is to be taken seriously.

Regionalization is ever more important in the light of the expected changes of the counter-piracy campaign in the near future. While the US-led Combined Maritime Forces have announced that they will continue their counter-piracy operations, the two other international naval missions are in a phase of transformation. In December NATO has ended its Operation Ocean Shields. EUNAVFOR Atalanta has a mandate running till the end of 2018. It seems however unlikely that the mission will continue in its present form. The EU is currently reviewing its engagement in the region, which includes rethinking how the spectrum of EU missions (including EUCAP Somalia, MASE, and CRIMARIO) contribute to maritime security in the region. The CGPCS will not be able to directly influence how the multi-national naval missions will continue their work or what force levels the independent naval missions will provide for counter-piracy work in the region. The plenary however needs to send a strategic message to the international community that the commitment to counter-piracy continues.

The CGPCS will also have to address a number of housekeeping issues and decide how it wants to continue its work. The 19th plenary meeting held in summer 2016 in the Seychelles implied an institutional reform but ended with strategic ambiguity in what kind of working group formations the group will continue to meet. Through this solution, flexibility was ensured and the precise working configuration was left open to practical needs. In the past 12 months only the Regional Capacity Building Coordination Working Group has met and shown activity. Given the importance of regional capacity building work and the significant coordination challenge involved (as discussed above), it seems important that this group continues its work.

The status of other groups seems less clear. The fact that few meetings were convened or other significant activity took place, raises the question whether groups such as the Law Enforcement Task Force, the Legal Forum, or the Working Group on Coordination at Sea are still needed. In particular, for the latter group, the CGPCS requires a discussion of whether the group that was tasked to discuss issues such as the coordination of naval operations, the relation between the shipping industry and navies, the Best Management Practices and the High Risk Area (HRA) is still the right format. An argument can be made that SHADE meetings are sufficient to address any arising issues. Yet, SHADE is an explicitly de-politicized forum, and a number of questions, for instance, future revisions of the HRA can hardly be addressed in it. Moreover, in the light of the recent piracy incidents, the working group might be the right forum for interpreting the level of threat in the light of the SHADE assessments.

Housekeeping II: The future of the CGPCS plenary meetings

The other major, and perhaps most fundamental question that the CGPCS will need to address is whether frequent plenary meetings should continue. At the 19th plenary meeting, it was contested whether the CGPCS still requires such meetings. The question was postponed and placed on the agenda of the 20th plenary.

In 2016, initially three reform options were discussed for the CGPCS: to widen its mandate 1) to include other piracy-infested regions (e.g. the Gulf of Guinea or Southeast Asia), 2) to start tackling other maritime insecurities in the Western Indian Ocean (such as fishery crimes, trafficking of illicit goods and people), or 3) to further streamline the work of the group. The third option of streamlining became the agreed position.

A broad coalition of participants preferred a model in which the CGPCS plenary would only be organised if absolutely required and the work would be continued in working groups. Other participants preferred the opposite model: to continue the plenary meetings which would take over the functions of the working groups. The argument was that the CGPCS plenary performs important diplomatic functions, ensures high-level information exchange and provides legitimacy for the activities in the region. At the 20th plenary the CGPCS will have to find an answer to the question of whether the remaining coordination work should be carried out in plenaries or in working group meetings. If a consent is found for the working group option, this would imply to agree on an appropriate mechanism of how the plenary could be reconvened if required.

At its 20th meeting, the CGPCS can be proud of its achievements and its great successes in containing piracy. The celebration, however, will be overshadowed by some difficult conundrums. Is piracy contained, or are we currently witnessing a return? International actors want to scale back their engagement, but when can the region actually take over some of the work? The CGPCS was an ideal format to deliver highly efficient solutions to a crisis situation in short time, but what form of Contact Group, what form of collaboration and cooperation mechanism does the current situation require? Certainly the 20th plenary will not solve these questions, but it will provide an important opportunity to shape the regional counter-piracy architecture of the future. It is likely that we will see a significantly reformed CGPCS after the 20th plenary.