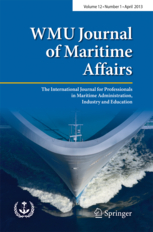 A special issue has just been published by the WMU Journal of Maritime Affairs (Springer Verlag). The issue aims at contributing to the ongoing discourse on maritime piracy and its various contexts: socio-political stability, development, economics, legislation, policy, law enforcement, regional security, international cooperation, human rights, health, andrisk management, among others. The April 2012 issue is one of the very few issues of any journal that has dedicated anissue exclusively to the contemporary menace of piracy; even fewer such issues are readily accessible on line. Dr. Samuel Pyeatt Menefee (Maury Fellow, Center for Oceans Law & Policy, University of Virginia and Adjunct Professor, World Maritime University) and Dr. Maximo Q. Mejia Jr. (Associate Professor, World Maritime University) served as Guest Editors for the WMU Journal’s April 2012 issue.

Menefee and Mejia provide the first article, “A ‘rutter for piracy’ in 2012″ that offers an update on contemporary piratical incidents and a short review of major research titles dedicated to the topic of modern maritime piracy, before presenting the ground-breaking group of scholarly essays which make up the special issue. The call for papers attracted submissions from authors covering a variety of disciplines. The mix of nine articles focus on development, forensic investigation, statistics, geopolitical studies, and legal issues related to the problem of piracy. Together they document well that piracy studies has become an inter-disciplinary field, and that inter-disciplinarity is the way forward to improve counter-piracy practice.

The second article, “Drops in the Bucket? A Review of Onshore Responses to Somali Piracy” by Christian Bueger examines onshore counter-piracy initiatives designed to address local populations at the clan, sub-clan and village level. These programs aim at increasing surveillance, sensitizing populations to the consequences of piracy, and providing rehabilitation or alternative livelihood opportunities. Bueger discusses the promises and difficulties encountered in addressing piracy through such programs. Five major problem areas are considered in the paper, namely knowledge problems, implementation problems, counter-intuitive consequences, tensions towards other parts of counter-piracy strategy, and the securitization of aid.

The third article, “Investigating Sea Piracy: Crime Scene Challenges” by Henri Fouché and Jacques Meyer, presents important lessons learned from the authors’ participation in a team of forensic investigators and detectives that conducted a crime scene investigation on board a very large crude carrier (VLCC) at sea off Durban, South Africa. Prior to the investigation, Somali pirates held the VLCC hostage for 58 days. The article examines the unique investigative challenges faced by the forensic investigators and detectives who conducted the investigation and processed forensic evidence on what had effectively been declared a major crime scene. In conclusion, the authors distill the views of the forensic team and put forward suggestions that may assist in establishing best practices for dealing with and processing physical evidence at future major maritime crime scenes.

The next article, “Is Somali Piracy a Random Phenomenon?,” by George Kiourktsoglou and Alec Coutroubis, investigates whether Somali piracy is a random phenomenon. The research is conducted and presented in two distinct parts. The first challenges the widely held belief that Somali pirates select their targets at random and that the decision to attack a vessel registered under a particular flag is unrelated to the participation of the flag state in any of the naval forces operating around the Horn of Africa. The second part questions whether certain nationalities of crews are more vulnerable to falling victim to Somali pirates. While the study, in both parts debunks the theory of randomness, it does not necessarily prove causality. In other words, while there is a very strong correlation between the nationality of the ship or its crew and the number of pirate attacks, neither the flag of a ship nor the passport of the seafarer automatically create the risk of attack. Nevertheless, the study concludes that the statistical correlation reveals an interesting pattern that cannot be random and that calls for further research to better understand potential causal links.

Martin N. Murphy’s article, “International Cooperation Against Piracy: China’s Role, Problems and Prospects” probes into the motivations underlying the participation of states in counter-piracy actions, particularly the assembly off Somalia of the biggest multinational naval flotilla the world has ever seen. Murphy notes that Somali piracy has attracted the interest of China whose citizens have been attacked and hijacked. In his article, he asks whether this deployment demonstrates that China is committed to the protection of shipping in the context of the existing maritime order or if it has a wider purpose to advance Chinese interests in the Indian Ocean region. While the suppression of piracy would appear to be in the interest of all states, the author observes that states have often been more ambivalent as they have found piracy to be a useful cloak behind which to hide their wider geo-strategic ambitions.

The next four articles cover legal topics, two of which deal with jurisdictional issues and the other two dealing with marine insurance issues. Matteo del Chicca’s article, “Universal Jurisdiction as Obligation to Prosecute or Extradite,” examines the existing international legal framework to determine whether the principle aut dedere aut iudicare – extradite or prosecute – constitutes an option or an obligation on states. Del Chicca’s analysis leads him to two conclusions. Taken strictly from a treaty law point of view, the above principle limits the obligation to states party to the relevant condition, to be applied under conditions stated by such convention. On the other hand, if we consider it as a principle of customary international law, because piracy – as crimen iuris gentium – offends international community as a whole, then the principle aut dedere aut iudicare should be binding under all circumstances.

Paul Musili Wambua’s “The Jurisdictional Challenges to the Prosecution of Piracy Cases in Kenya: Mixed Fortunes for a Perfect Model in the Global War Against Piracy,” gives voice to the experiences of a country literally at the forefront of the legal battle against maritime piracy. Since 2008, Kenya has been prosecuting suspected pirates in its national courts under bilateral agreements entered into by the country with the leading maritime nations. Wambua discusses the new merchant shipping act enacted to overcome, among others, jurisdictional challenges it faced in prosecuting suspected pirates. He concludes that while the litigation process is still fraught with challenges due to lack of financial and human resources, the Kenyan approach is a model that should be replicated in other states. Not only does it grant extra territorial jurisdiction to national courts, it also affords a comprehensive translation into domestic law of the most important anti-piracy provisions found in a number of international treaties.

Gotthard Gauci’s contribution, “Total Losses and the Peril of Piracy in English Law of Marine Insurance,” uses case law to highlight a major piracy-related flaw in the Marine Insurance Act 1906 in determining whether a seizure of the subject-matter of insurance, in this case cargo, by pirates, demanding a ransom, can give rise to a claim for a total loss. Gauci examines the implications of recent judgments against the backdrop of the English marine insurance definition of piracy and the intricacies of the law relating to constructive and actual total losses. He then concludes that there is a need to harmonize the marine insurance definition of piracy with that in the domain of public international law. Furthermore, he posits that legislative intervention should be considered for the purpose of ascertaining the point in time whether and when seizure by pirates can constitute a total loss.

The final article in this special issue is Constantinos Lambrou’s “The Implications of Piracy on Marine Insurance: Some Considerations for the Shipowner.” Lambrou examines how the marine insurance market is being affected by the threat of modern piracy, and seeks to identify the options available for the recovery of a ransom payment by the shipowner. Problems associated with recovering the ransom payment from insurers – arising from illegality, unseaworthiness and exemption clauses, among others – may be overcome if clauses are carefully drafted to specifically cater for piracy in a marine insurance policy. Several inconsistencies may also be resolved by transferring the piracy peril to war risks cover. Lambrou concludes that the shipowner’s duty is to respond to the changing circumstances, by ensuring that his vessel is sufficiently equipped and the crew is properly trained to avert a hijacking incident.

Following the above nine articles, the special issue ends with a book review by Max Mejia of Natalie Klein’s Maritime Security and the Law of the Sea and a conference review by Mark Sawyer on the International Conference on Piracy at Sea (ICOPAS 2011). The conference, hosted jointly by the World Maritime University and the International Maritime Organization, was held in Malmö, Sweden on 17-19 October 2011. The conference featured presentations from over 40 subject matter experts representing militaries, governments, special interest groups, academia, and non-government organizations. Over 400 individuals participated in the Conference. The goal of ICOPAS was to increase exposure of the increased global threat of maritime piracy and discuss possible solutions in mitigating and eradicating the threat. In particular, the conference highlighted the significant humanitarian impact of piracy and focused on humanitarian support initiatives such as the Save Our Seafarers campaign. ICOPAS concluded with the adoption of the Malmö Declaration urging all concerned to do their utmost to coordinate efforts in combating piracy and other violent crimes at sea.

Taken together, the articles in this special piracy issue of the WMU Journal of Maritime Affairs articulate and dissect some of the most pressing issues facing both public and private institutions as well as humanitarian and commercial entities in their quest for lasting solutions to the current challenges. They are a welcome addition to an assortment of tools available to the policy-makers who will have to make the important decisions that will contribute to arresting the level of piracy attacks or to mitigating its most negative effects. The value of this special issue must be judged not only in how it offers some of the answers, but more importantly by the questions that it generates and the thoughts that it provokes, paving the way for future studies on piracy and advanced scholarship on the topic.