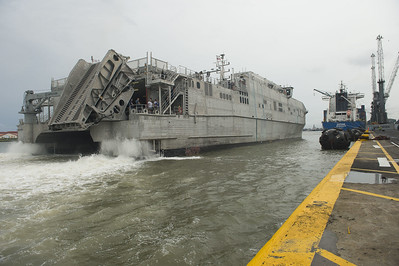 In a recent article published in Africa Insight, Lisa Otto puts forward the findings from her analysis of a five-year dataset for maritime crime that she collected and collated for the period 2009 to 2013. Analysis of this data, which was collected by cross-referencing reports from the International Maritime Bureau and the International Maritime Organisation, supplemented by information from other sources where possible, has allowed her to determine the contours of maritime criminal activities in Nigeria, and the Gulf of Guinea beyond. One of the key contributions of the paper is the presentation of a typology of maritime crime in that sub-region, which has been refined, based on the data, from the works of Martin Murphy. The paper puts forward five categories of crime:

– A: inland assaults affecting vessels at berth or at anchor and awaiting berth which largely constitute petty theft and tend to be unsophisticated in nature;

– B: coastal shipping assaults that occur while vessels are underway, adrift or at anchor further offshore, with theft being more extensive, and with perpetrators being armed with heavier weaponry;

– C: coastal shipping assaults as above but with selective and strategic kidnap-for-ransom;

– D: the hijackings of vessels at anchor, in port, or offshore, with the vessels often being redirected for cargo theft, or being repurposed for use as mother-ships;

– E: installation assaults or targeted cargo theft, typically embodying what has come to be known as ‘petri-piracy’, a sophisticated type of attack perpetrated on the basis of intelligence and with advanced weaponry.

Further, although a lack of the availability of data necessitated its exclusion, the research did note that a category of attacks against local vessels (mostly fishing vessels) should otherwise be included.

The paper also traces trends of crime in the sub-region over the period, highlighting the proportion of attacks by country, the category of attack (per the typology), whether attacks were armed or not, whether injuries or casualties were sustained, whether attacks were reported or expressly not reported by affected vessels, and then if and how states responded. Aside from being able to provide statistics against the mentioned data points, this also allows the inference of a number of things including the attitude of shipping companies toward the will and capacity of states to respond, which states are most likely to respond, and where political is likely to lie on this basis.

Modus operandi is detailed per category of attack, including detail around how criminals are likely to be armed, and how likely they are to make use of violence as a means to an end.

The final contribution of the paper is the drawing of a linkage between offshore oil theft and oil bunkering (theft inland, most often in Nigeria’s river Niger Delta). The research on which the paper is based has elucidated that it is very likely that the same groups are involved as organised criminal syndicates for oil theft both offshore and inland, recruiting local gangs based on their needs for varying operations. All indications are that this is a very sophisticated and highly organised type of operation, with oil thieved from these different domains being destined for different markets based on the quality of these products.

This research is a first step, in an ongoing effort on the part of the author, toward developing empirical research to study and better understand piracy and maritime crime in West Africa’s Gulf of Guinea. An obvious caveat must be stated regarding the reliability of the data, which is brought on by the serious phenomenon of underreporting. This means that data that is available may not necessarily be providing a wholly accurate picture of situation. It is for this reason that reports need to be cross-checked, information about further reports be gained from untraditional sources, and extensive interviews be conducted with those on the ground, who deal with attacks, or the threat thereof on a day-to-day basis. This is an important starting point for deeper analysis of maritime criminal challenges in this particular domain.

Lisa Otto is a Research Associate at Coventry University’s Centre for Trust, Peace and Social Relation’s where she conducts research and teaches on the Centre’s MA in Maritime Security (email address: isa.otto@coventry.ac.uk).