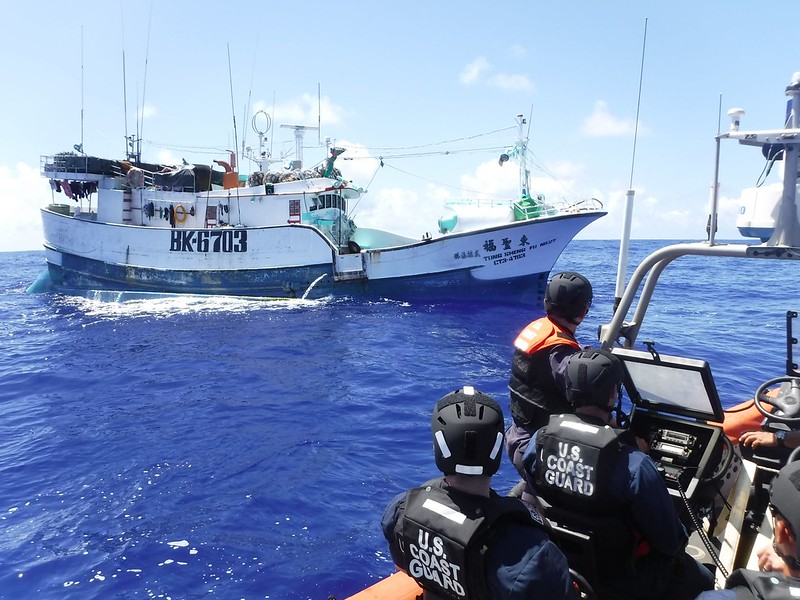 Illegal, Unreported and Unregulated (IUU) fishing is a significant transnational crime problem that costs developing nations up to $15 billion in economic losses annually (Liddick 2011). Perpetrators include established organized crime groups as well as commercial fishing operations; moreover the incidence of IUU fishing is often shaped and facilitated by corrupt public officials. Various economic drivers, the exceptionally high value of some species, and the Flag of Convenience (FOC) system of vessel registration contribute to the significance of the problem. Negative environmental impacts involve the depletion of fish stocks, damage to coral reefs, and stress on marine mammals and birds. Social and economic impacts are severe as well, and are most especially prevalent in developing nations. While an impressive number of initiatives, public and private, have been undertaken to address the problem, the very conditions that give rise to IUU fishing render attempts to combat the problem quite difficult. Don Liddick analyses the problem of illegal fishing in a recent article in Trends in Organized Crime.

As much as 75% of the world’s fish stocks are either depleted or overexploited, with the collapse or near collapse of some fish species. While this depletion is caused in part by perfectly legal, yet irresponsible, overconsumption, it is also true that at least 15% of the total world catch – anywhere from 11 to 26 million tons annually—is associated with IUU fishing (Agnew et al 2009). In addition to stress on fish stocks and associated negative impacts on broader marine ecosystems, IUU fishing precipitates damage to the food security and livelihood of coastal populations. In Europe, perhaps half of all seafood consumed has illicit origins, and in some fisheries, illicit activity accounts for approximately one-third of all catches.

Common practices of IUU operators include the dumping of fish, called “high grading”, the harvesting of prohibited species, overfishing of permitted species, falsifying catch weights, fishing without a license or out of season, and utilizing banned gear.Particularly detrimental to third world nations is the practice of fishing in a state’s jurisdictional waters without authorization. For example, most illegal fishing in the Southern African Development Community (SADC) region is perpetrated by Distant Water Fishing Nations (DWFNs) like Spain, China, Taiwan, Indonesia, Russia, and Korea—IUU fishing in this instance rises to the level of corporate and governmental crime on a transnational scale, as foreign commercial interests, with the complicity of home governments, rob the populace of developing nations.

While it is widely agreed that IUU fishing is prodigious and global in scope, there exists substantial variability in the level and trend of IUU catches across regions. In a 2009 analysis of illegal and unreported catches in the territorial waters of fifty-four countries and fifteen high seas regions, researchers found that illicit activity was greatest in the Eastern Central Atlantic and least in the Southwest Pacific (Agnew et al 2009). Increased control by coastal states has led to a decline in illegal fishing in the Western Indian Ocean, while an increase in illicit activity in the Northwestern Pacific is due almost entirely to the role played by Chinese and Russian operators poorly policed by their home governments. Estimates of illegal and unreported catch in the Northeastern Pacific is low and continues to decline, but in the Western Central Pacific the problem has been, and remains, relatively high—the waters about Indonesia are especially notorious as an area with a huge amount of unreported catch.

In addition to violations by commercial fishing operators, it is not uncommon for organized crime groups to engage in IUU fishing. In the 1990s Russian criminal syndicates were estimated to earn $4 billion a year through the illegal exportation of some two million metric tons of seafood, mostly Caspian Sea sturgeon and other seafood products to Japan, Europe, and the United States. Elsewhere, the illegal harvesting of abalone is thought to generate $80 million annually, and involves Russian syndicates, Chinese Triads, and other Asian gangs. IUU fishing in South Africa is also associated with money laundering, drug trafficking, and racketeering. Organized crime groups are especially notorious for their involvement in the trafficking of caviar. The eggs sell for up to $500 per kilogramon the black market, but in the United States and Europe, it retails for ten times that amount. The black market in caviar has also bred violence, as officials attempting to halt caviar smuggling have been killed—in the 1990s, two dozen members of a Russian anti-poaching unit were murdered, and in 1996, fifty-four Russian border guards assigned to disrupt the illegal caviar trade were killed in a bombing (Zabyelina 2014).

There has also been an observed overlap between IUU fishing and other forms of organized maritime crime, including drug smuggling. Fishing vessels are integral to the transshipment of cocaine from the Andean region to Mexico, activities which include the provision of offshore refueling services for ships carrying drugs, the transport of cocaine from larger ships to remote landing sites and commercial ports, and direct point-to-point delivery of cocaine shipments. Fishing vessels are also associated with the traffic in other types of illicit drugs, including heroin, marijuana, and amphetamines.

A significant link exists between IUU fishing and other forms of transnational organized crime, including trafficking in persons for the purpose of forced labor on fishing boats—a practice that includes the exploitation of women and children. De facto slavery in the fishing industry occurs across the world’s oceans, but is especially prevalent off the coasts of West Africa and Southeast Asia. Working conditions are often brutal, and include physical abuse, sexual exploitation, and in some cases, death. The principal actors in these human trafficking crimes are recruiters, senior crew on fishing vessels, and the fishing company or operator.

A nexus between IUU fishing and maritime piracy has been observed as well; specifically, the well-documented incidences of piracy in or near Somali waters seems to have developed within the Somali fishing industry, at least partially as a consequence of illegal fishing. A similar IUU fishing-piracy link has been observed in Southeast Asia (Samatar et al 2010).

One of the most important factors that contributes to IUU fishing is a perfectly legal practice related to fishing vessel registration common to large-scale, commercial fishing—under international law, nation-states are permitted to issue “Flags of Convenience” (FOCs) to foreign vessels, normally for a relatively small fee. International maritime law also stipulates that the country whose flag a vessel flies is responsible for that ship, thus creating a considerable regulatory loophole that allows IUU fishermen to circumvent management and conservation measures at will. For example, the FOC system allows vessels to engage in flag-hopping, where they simply re-flag several times a year to confuse surveillance. Under FOC arrangements there is often little or no link between the flag nation and the owner of a given fishing vessel. In many cases, FOC vessels are backed by shell companies, joint ventures, and hidden owners, making it difficult to identify and fine owners even when regulations are enforced. The confidentiality of some banks likewise facilitates the system of hidden ownership.

The problem of IUU fishing has acquired increasing international attention in recent years, precipitating a number of efforts geared toward palliation. The United Nations drew up laws and regulations in the 1990s to combat IUU fishing, and in 2001, 110 nations endorsed the U.N. Food and Agricultural Organization’s (FAO) International Plan of Action to Prevent, Deter, and Eliminate IUU fishing (IPOA-IUU)—the principal international instrument aimed at addressing the problem. Components of the IPOA-IUU include trade restrictions, port enforcement actions, catch documentation schemes, vessel registration and licensing systems, maintenance of records of fishing vessels, and the implementation of monitoring, control and surveillance (MCS) measures.

One of the principal measures toward fisheries management involves the formation of Regional Fisheries Management Organizations (RFMOs), created under international agreements to be responsible for the management of high seas fisheries and fish that migrate through territorial waters of member states. In recent years, RFMOs have developed white and black lists of vessels that are permitted to fish in the waters of member states.

One set of strategies aimed at reducing IUU fishing that is quite promising, if difficult to implement, are trade-related and catch documentation schemes. Private fishing enterprises, observing that traceability of fish and fish products is central to catch documentation and regulation, have developed a tracking system that assigns barcodes to individual fish and state-of-the-art databases to track distribution. One company even allows consumers to track seafood back to the precise fishing vessel, location, and fisherman by entering a unique gill tag number on a website.

Efforts to combat IUU fishing have exhibited mixed results. A 2009 study of dozens of Economic Exclusion Zones (territorial waters) and high seas regions found that illegal and unreported fishing (not including unregulated fishing) declined in eleven regions and increased in only five of those examined (Agnew et al 2009). However, even with observable progress in some regions, enormous profits, public corruption, and the inherent difficulties associated with policing the world’s oceans render sustained progress untenable.

The protection of living marine resources and the enforcement of regulations intended to thwart IUU fishing presents what may be appropriately described as a conundrum. While likely necessary, the spate of regulations in recent years that have brought about gains in the conservation of some fish species have also contributed to and perhaps exacerbated legal, supply-demand, and cost/price asymmetries that provide ample opportunity for IUU fishers. It follows that a leveling out, a reduction in observed regulatory asymmetries, is foundational to successfully reducing IUU fishing.

Liddick, Don. 2014. ‘The dimensions of a transnational crime problem: the case of iuu fishing.” Trends in Organized Crime.

Don Liddick is an Associate Professor of Administration of Justice at Penn State Fayette. His research interests include organized crime, political corruption, environmental crime, crime theory, criminal procedure, comparative criminal justice, and popular culture/media and crime. He is the author of Crimes against Nature: Illegal Industries and the Global Environment, Praeger, 2011. Don can be contacted at drl119@psu.edu .