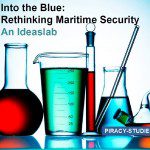 Insights from an ESRC sponsored Ideaslab on Maritime Security at Cardiff University, 26-27 June 2014

The concept of maritime security is one of the most recent additions to the vocabulary of international security. If security at sea used to be discussed in the frame of concepts such as seapower, maritime safety, or less frequently maritime terrorism, maritime security offers a new umbrella term, which to some degree replaces or subordinates the older terms and discussions. The salience of maritime security is related to the significant challenges that issues such as maritime terrorism, and, perhaps most prominently, maritime piracy pose. Piracy off the coast of Somalia was one of the determining concerns that lifted maritime security on the agendas of the major security organizations, including NATO, the European Union, but also the African Union or the Southern African Development Community. The rise of the concept of maritime security and the increasing importance that security actors grant to the maritime has so far been hardly reflected in the academic literature on the subject. While piracy in Somalia, West Africa and East Asia, illegal trafficking by sea, or the rise of new naval powers such as China have received more extensive treatment in the literature, the academic discourse is only slowly catching up with the empirical developments. Compared to the attention land based security questions receive, the maritime domain remains a blind spot of security studies and international relations.

To fill this gap, the ESRC sponsored Counter-Piracy Governance Project at Cardiff University organized an Ideaslab to strengthen the academic discourse on maritime security. For two days scholars and analysts working on maritime security discussed their work and ideas across disciplines and raised general theoretical as well as practical questions pertaining to the maritime. The goal was not only to cross-fertilize insights, but also start to understand the connections between concepts, governance and implementation as well as the inter-linkage between issues on the maritime security agenda. The participants of the Ideaslab reflected the multiple dimension of the maritime. Human Geographers, Security Scholars, Political Theorists, Lawyers and Architects, analysts from the Royal Navy, the UK Maritime Information Centre and the European Union, civil society, novelists and the private sector discussed the future agenda of maritime security studies. You can download the Programme and the Book of Abstracts.

The maritime is a complex field. Discussions pointed out that the maritime is a common space that facilitates global connections and interactions and serves as an economic and livelihood source for many countries and communities around the world. It is a space that connects and disconnects. And a space that is unruly and almost uncontrollable. Moreover, it is a space that hosts very different types of activities, stretching from trade, to fishing, resource exploitation and tourism. There are thus multiple ways in which ‘maritime insecurity’ can be understood, and how it affects and is dealt with by different actors and practices. Two ways of thinking – an operational and a relational one – turned out to be particularly useful. First, from an operational perspective maritime security is the product of a securitization process in which different issues are rendered as challenges and require coordinated responses. Second, from a relational perspective maritime security is best understood by the relations it has to other challenges, including national security and seapower, the marine environment and marine safety, economic development and the blue economy, and human security and the resilience of coastal populations. Both understandings of maritime security allow to grasp and discuss which actors are dealing with certain issues in the maritime domain, and how they relate to other each other, or how they should engage with each other.

The maritime is increasingly being securitized. The African Union, the UK as well as the EU have developed maritime security strategies. Also rising powers such as India and China are building up their naval and maritime administration capacities. The EU and its partners are meanwhile investing into maritime capacity building and security sector reform in Africa. Yet the proliferation of maritime security strategies raises questions. Maritime security is often driven by the concept of Seapower as states and regional organizations pursue their geopolitical and geostrategic interests. Territorial disputes in the South Chinese Sea and elsewhere indicate this trend in the shadows of international law and norms. The maritime industry however is a global one that is largely detached from national or regional affiliations. It will thus be important to put national security strategies in the context of the global nature of the industry. Furthermore, the maritime is part of the global commons, and maritime threats such as piracy are by nature transnational. To get around this contradiction between national security strategies and global realities and challenges requires problem solving and new theoretical and practical approaches. This leads to a core paradox on the agenda. Highlighting the strategic importance of the sea by securitizing maritime issues is core to address seablindness. Tackling many of the challenges of maritime security however requires rather the opposite: to desecuritize the sea. Issues such as the security of offshore oil platforms might be better addressed by environmental regulations; when it comes to deep seabed mining the focus should turn to discussing how to construct a fair (rather than secure) redistributive and management system; and also illegal fishing and the livelihoods of coastal populations are rather economic and development issues than security ones per se. Illegal fishing and the protection of Exclusive Economic Zones (EEZ) is in fact increasingly been put on the agenda of law enforcement and development actors.

Nevertheless, thinking about the maritime in terms of safety and security will continue to be essential. Environmental arguments and EEZ claims for instance can be put forward to achieve national strategic objectives and to justify actions that hinder freedom of navigation at sea. This in turn could have a negative impact on global security beyond the maritime. Furthermore, without maritime safety and security there will not be any deep seabed mining and no revenues to be redistributed in the first place. It is thus important to balance and mange different maritime interests, strategies and processes beyond securitization, rather than postulating a dichotomy between securitization and desecuritization.

Materiality, Technology and the Uncontrollable and Invisible

The maritime is a vast space. Maritime domain awareness and surveillance, monitoring and control was thus one of the core themes of the Ideaslab. The role of technologies is crucial here. The UK has for instance created an interagency Maritime Information Sharing Centre that collects, analyses, puts together and distributes information on real time maritime traffic and affairs to relevant governmental departments and the private sector. There are also discussions on the use of technologies such as drones, unmanned surface and underwater vehicles, and satellites to monitor activities on the sea. The way in which these technologies are developed and deployed by different actors and in different fields is an important area of study, as a recent workshop on technological solutions to piracy at the Copenhagen Business School has pointed out. Yet because of its materiality – its fluidness, vastness, depth, and mobility – the sea often escapes efforts to monitor and to control it. Coastlines change constantly, ships sink and objects disappear. The disappearance of flight MH370 is a case in point, showing how satellite images, complex calculation technologies, data visualisations, maps and graphs were constantly deployed to locate the plane in the southern Indian Ocean and to make it ‘visible’. That these efforts have so far remained unsuccessful demonstrates the limits of maritime surveillance, mapping and control technologies.

The Temporarily, International Order and the Business Model of Piracy

Somali piracy remains a major issue on the maritime security studies research agenda. It is a paradigmatic maritime security issue and many lessons can be learned from it. It shows how the land and the sea are connected and how state fragility and maritime insecurity fuel each other. Somali piracy demonstrates how very local issues can quickly reach transnational scale. The success in curbing it, moreover, suggests that the international community can address maritime security challenges if working closely together. Somali piracy is hence an important case study of contemporary maritime security governance that has both theoretical and practical implications. Ideaslab participants argued that Somali piracy is often seen as belonging to a non-Western, irredeemably different, temporality from which no escape, “progress” or political agency is imaginable. Pirates and Somali people, on the other hand, by referring to issues such as illegal fishing and exploitation, locate piracy in the very Western present. Piracy has in fact historically and presently played a broader role in constructing the international normative order through the construction of the sea as a social space in which existing claims of international order are made and reproduced uncritically. One such claim is that Somali piracy is a criminal business model. Produced by economists and Anti-Money Laundering Specialists, the business model of pirates originally ‘humanized’ the enemies of mankind and deconstructed their coastguard narrative. Yet the business model approach towards Somali piracy is unlikely to produce a lasting solution to the problem. Not only does it ignore local grievances over illegal fishing, but playing with alternative economic incentives stabilizes the same profit driven behaviours that have driven piracy in the first place.

Maritime security is a rapidly growing field of analysis and research. Many of the maritime security issues remain poorly understood. How they are linked to each other, how they can be addressed and how weaker states can be better assisted to secure their waters, remain open questions. Often too much intellectual energy has been invested in studying the battles of the past, rather than the issues of the future. A new generation of scholarship, one that takes the linkages between seapower, marine safety, the blue economy and the resilience of coastal populations as a starting point, is required. The vastness of ocean space escapes any single discipline. Ocean governance that addresses maritime insecurity will have to operate on the local, national, regional and global level alike. The new maritime security studies will have to recognize the irreducible complexity of maritime security, and continuously work towards strengthen the links between reflexivity and concepts on the one side, and governance, strategy and implementation on the other.

Jan Stockbruegger is a PhD graduate student in International Relations and Political Science at Brown University.

For those interested in our upcoming sea cables event, check out @c_bueger and @TobiasLiebetrau article here on protecting hidden infrastructures.

What is going wrong in shipping? Watch our discussion on @AJEnglish focusing on the implication of Covid and better regulation of our global transport infrastructure. @safeseas1 #marsec
Watch it here: https://www.youtube.com/watch?v=izbfnzVSqw8