Maritime Security is a buzzword and no consensual definition has emerged on the concept. The absence of a universal definition is not necessarily a problem given the political character of the term, and the need for having country and region specific understandings of what challenges maritime security poses. In outlining situation specific working definitions it is important to avoid two approaches: Firstly, the laundry list approach, in which the concept is defined as the prevention of a list of threats, which is not further prioritized. Secondly, the normative approach, which equates maritime security with an idealized understanding of “good order at sea” without specifying what this order is supposed to be or whose order it will be.

Bueger proposed in 2015 an alternative approach, which concentrates on identifying the relations of maritime security to other concepts that deal with the governance of maritime space. As he argued, in particular, the relation to four concepts is vital: sea power, marine safety, the blue economy and the human security of coastal populations. These four concepts are established and point to different challenges of maritime governance which may or may not be integrated into maritime security. Seapower concerns the role of military force and the maritime dimension of inter-state war and threats to national survival. Marine safety concerns the regulation of shipping, port security, the safety of seafarers, search and rescue provision, but also the protection of the marine environment. Blue economy concerns the economic opportunities that are offered by the maritime, ranging from resource extraction to tourism. Finally, human security considers the living conditions of coastal communities dependent on the sea, in particular, their food security and the risk of their marginalization in land focused governments. 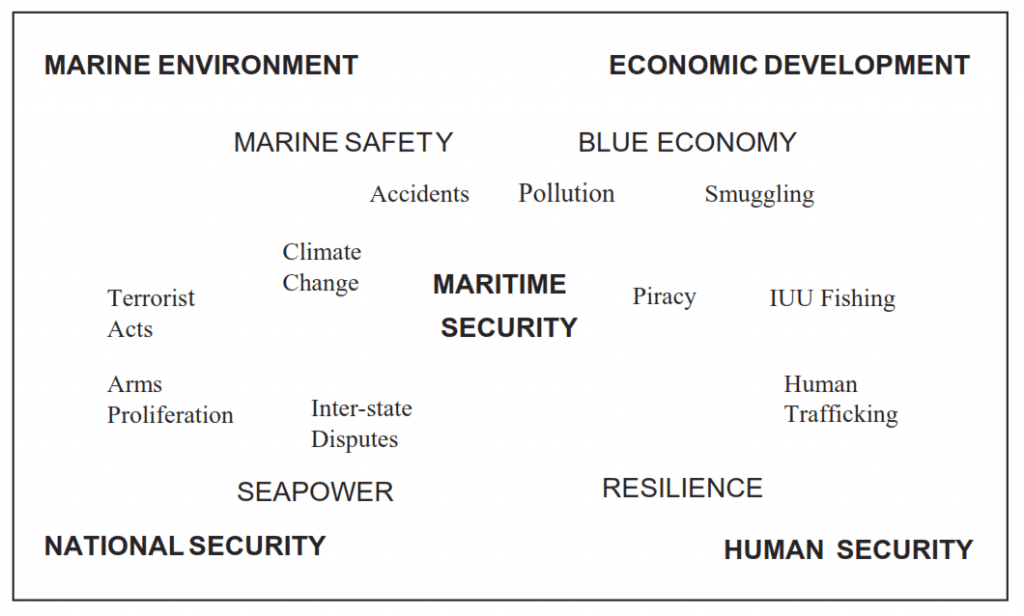 Linking the concepts to each other

Whether and how the tasks associated with these four concepts are integrated into maritime security is a question of national and regional political priorities. It is also a question of capabilities and resources. Many Western states and organizations, such as for instance the US or NATO, separate out the so-called high-end tasks of national defense, strategic deterrence, military strategy and the preparation for naval warfare from maritime security. Threats such as inter-state war or conflicts are hence excluded from the definition of maritime security and the focus is on maritime violence and crimes. This, however, requires significant resources, in particular, a sizable navy which can be tasked separately for sea power functions. In the case of the majority of African countries, this will not be feasible and the limited naval resources are better integrated into maritime security.

The tasks of marine safety and maritime security are often inseparable and raise the question of whether marine safety should be fully integrated or subsumed under maritime security. This quite obviously raises questions of civil-military relations and in particular jurisdictional issues. The blue economy is often not directly linked to maritime security, notably, in so far, that different actors are involved in developing economic sectors. Yet, the opportunities of the blue economy are one of the major motivations for the provision of maritime security. A secure environment is a precondition for harnessing ocean resources. The human security of coastal populations tends to receive the least attention. It is a dimension often dealt by agencies with a land-focus. However, the link between coastal human security and maritime security is immediate: If threatened in their livelihood and marginalized coastal populations are more inclined to engage in criminal or violent activities.

The most importance consequence of these considerations is the need to appropriately strategise which synergies maritime security can bring by integrating seapower, marine safety, blue economy and coastal human security. Rather than contemplating definitions, the maritime security discourse requires to focus on these. In particular under limited resources, developing capacities that offer promises in all domains have to be priorities.

"When the UK leaves the #EU the complex
intergovernmental arrangements that for forty years
regulated the usage of, & traffic through, its waters
will revert to a national responsibility."

People have a lot on their minds, but #MaritimeSecurity never rests. A reminder of our latest Policy Report - 'Delivering Maritime Security after Brexit: time for a joined-up approach'

People have a lot on their minds, but #MaritimeSecurity issues never rest. Find our Policy Report on how UK can best deliver maritime security post-Brexit below. It draws from Securing Britain’s Seas ideaslab, produced by @EdmundsProf and @DrScottEdwards